In light of Paul Mullin’s return to the Abbey, UTAS takes a look at some of the other Merseyside-born players to have donned the Amber & Black. 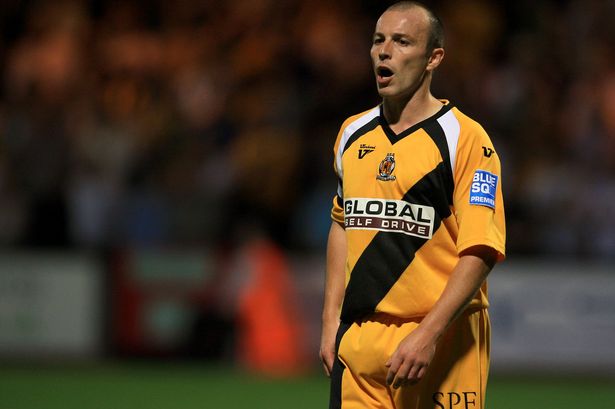 Arriving at the Abbey during our Conference spell, Carden quickly established himself in the heart of the team with a series of committed performances which earned him fans-favourite status. Under fellow Scouser Gary Brabin he was promoted to assistant-player-manager, and kept the position when Martin Ling took over, although by this time Carden’s age had started to catch up with him and he became less effective but still managed to hold down his position. It was during this later time under Ling that Carden was loaned out to Brabin’s new club Luton Town where he played against us despite still being our assistant manager. Another Conference legend, Parkinson was part of Liverpool’s 1996 FA Youth Cup winning team alongside Jamie Carragher and exciting-striker-turned-even-more-exciting-tv-pundit Michael Owen. He arrived at the Abbey after spells at Tranmere, Sheffield United, Notts County and Grimsby but was almost instantly ruled out for the season after damaging his ACL. After returning to the team Parkinson re-established himself, appearing for us at Wembley in the playoff final defeat to Torquay. Another fan favourite, Parkinson was never the same player after the injury and moved to Gateshead before the end of the 2009/10 season.

Scouse hitman McEvilly enjoyed a short but prolific stay at the Abbey, scoring 13 goals in 31 games as United pushed for promotion under Jimmy Quinn. Despite the relatively few appearances, McEvilly will go down as a United hero for his two goals in the play-off semi-final at Burton, setting United on course for an ultimately unsuccessful Wembley date with Exeter City.

Another product of Liverpool’s Youth Cup winning side alongside Parkinson, Cassidy arrived at the Abbey with high hopes, but again injury caused him to make only ten unremarkable appearances for the U’s before crossing the river to Cambridge City. Jamie Carragher mentioned in his autobiography that Cassidy would have established himself as a regular at Anfield had he not suffered a serious injury early on in his career.

OK, he never actually played for United, but Connors remains a part of United folklore after being sacked immediately after signing for lying about a pre-existing injury during his medical. He won his appeal against his dismissal, and returned to the Abbey where he was eventually released shortly afterwards.

Whilst we’ve never played Liverpool in a competitive fixture, and only faced Everton once (a 3-0 League Cup defeat at Goodison in 1976) there are a couple of other Merseyside connections we couldn’t finish the article without mentioning, firstly former manager Gary Brabin, who took us to Wembley in 2009 playing an exciting brand of football, and promotion maestro Richard Money, who although was born a bit closer to home in Lowestoft, won the European Cup in 1980 with the Reds, but more importantly the FA Trophy/Promotion double with the U’s in 2014.

Have we missed your favourite Scouse United hero off? Disagree with our choices? Let us know on Twitter twitter.com/abbeystandpod