It’s been a while since we’ve had an exciting cohort of youth prospects ready to break through to the first team. With Harry Darling and Leon Davies already establishing themselves in the first 11, and Tom Knowles returning to the the Abbey after a successful loan spell at Chelmsford last year we have a look at the young U’s hoping to make an impact next season. 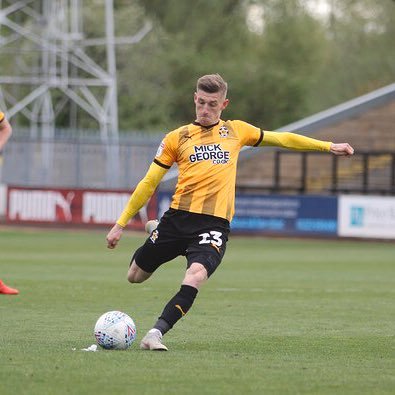 An attacking midfielder, Knowles made three first team appearances at the end of 2018/19, culminating with a nicely taken free-kick goal against Morecambe. With other players ahead of him in the first team picture he spent last season on loan at Chelmsford, scoring a number of impressive goals before being recalled to the Abbey just as the season was prematurely curtailed. Next season will be a big one for Tom to make the step up to the first team squad.

Starting off as backup to George Taft and Greg Taylor, Darling stepped up when called upon and put in a succession of cultured appearances at centre back before making the position next to Taylor his own under Bonner. Widely expected to be a first choice centre back next season.

Having initially broken into the first team as a right sided defender, Leon’s crossing ability has seen Bonner push him further up the park into a position on the wing. One of the best crossers of the ball at the club, Leon will be looking to nail down that position next year. He’s also a great ambassador for the club, winning the PFA’s Community Champion award for 2019/20.

From Ely, local lad Simper is a goalscoring midfielder who alongside Tom Dickens was rewarded with a professional contract. Rated by many at the club as one of the most talented prospects to come through the youth team in years, Simper has an eye for a pass as well as an eye for goal, proved by a number of eye-catching efforts last year.

Dickens also signed his first pro contract with the club last year, a classy defender he has played for the club at every level of the youth system and will be hoping to get some first team minutes under his belt this season.

Young striker Neal spent time on loan at Royston and then Needham Market last year before linking up with Simper and Dickens at St Neots as part of United’s tie-up with them, which saw Barry Corr become Saints manager. A regular goalscorer at youth level, Neal might find it tough to break into the first team this season but we hope another successful loan spell or appearances in cup games could see him ready to step up.

Striker Ben Worman is entering the last year of his first deal with the club so will be hoping to break through into the first team picture and earn himself a new contract this coming season.